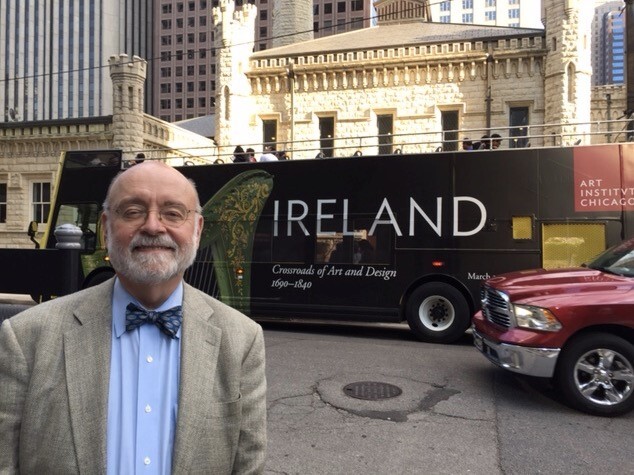 Christopher Monkhouse, a leading historian of the decorative arts who held positions in several major American museums, was involved with the Irish Georgian Society for more than half a century. Arguably the crowning event of his busy and varied career, the exhibition Ireland Crossroads of Art and Design, 1690-1840, held at the Art Institute of Chicago in 2015, triumphantly put the visual arts of eighteenth-century Ireland onto the ‘world stage’.

Born in Portland, Maine, in 1947, a graduate of the University of Pennsylvania and early alumnus (1966) of the Attingham Summer School, Christopher’s earliest passion was for the architectural heritage of his native New England. His first publication was a 1969 pamphlet for the Bostonian Society on the eighteenth-century Faneuil Hall market, then under threat.

By this date Christopher was already visiting Ireland regularly – he first came in 1966 – in time specifically to study the eighteenth-century hotels on the Grand Canal, as part of his research for a thesis at the Courtauld Institute supervised by Nikolaus Pevsner. This interest in Ireland’s contribution to hotel architecture, inevitably led him into the circle of Desmond and Mariga Guinness and the early Irish Georgian Society, and friends made at Leixlip – the late Rolf Loeber for example – would go on to contribute in one way or another to the 2015 show.

Back in London when working at the Victoria and Albert Museum he met and formed a lasting friendship with Desmond FitzGerald, Knight of Glin, which would bear fruit spectacularly many decades later.

From the V&A Christopher returned home to the United States where he would work for the rest of his career, serving for some fifteen years as curator of decorative arts at the Museum of Art, at the Rhode Island School of Design. As comfortable in the fields of European and American decorative arts, he also moved easily between the study of furniture and architectural history, with his exhibitions at RISD including Buildings on Paper: Rhode Island Architectural Drawings, 1825-1945 (1982) and American Furniture in Pendleton House (1986).

After serving as the founding curator of the Heinz Architectural Center, where he was instrumental in forming its important collection of architectural drawings, and subsequently at the Carnegie Museum of Art in Pittsburgh, in 1995 he was appointed curator in the department of architecture, design, decorative arts and sculpture at the Minneapolis Institute of Arts and finally, in 2007, Eloise W. Martin curator and chair of the department of European decorative arts at the Art Institute of Chicago. Among major acquisitions which he made for Chicago was the remarkable cabinet that Horace Walpole designed for his friend Thomas Brand based on his own at Strawberry Hill.

The Knight of Glin and Christopher stayed in touch over the years and often when they met would discuss the possibility of an exhibition on Irish art. Christopher’s move to Chicago with its strong Irish connections inspired him to put this long-held aspiration into action and an immediate catalyst – a good omen – for the show was the discovery of the signature of the Dublin cabinetmaker John Kirkhoffer on a bookcase of 1732 in the Art Institute’s own collection.

Without doubt one of Christopher’s best early decisions – as he would frequently acknowledge – was to hire Leslie Fitzpatrick (also ex-V&A) as his assistant curator. Together they travelled thousands of miles in Ireland researching houses and landscapes, looking at objects and visiting archives. They also crisscrossed the United States and loans were drawn from collections all over North America. In total the research for the exhibition took more than six years. Some four hundred objects were included, paintings, prints, furniture, bookbindings, silver, glass, ceramics, textiles, miniatures and musical instruments, with not just all the great Irish artists represented but also masterpieces by European artists – David, Hogarth, Claude, Hobbema – that had once graced Irish collections.

Christopher’s belief in the ‘Irish exhibition’, as it became known, was total, and, for a very mild-mannered man, he could certainly fight his corner, seeing off attempts to scale back his, it must be said, enormously ambitious, plans when the recession hit museum finances. When it counted most, he enjoyed the unwavering and immensely generous support of some great friends of Ireland – and the Art Institute – in Chicago who were as determined as he that the exhibition should take place.

The exhibition finally opened to the public on St Patrick’s day 2015, after a gala dinner for more than four hundred guests. Very appropriately it was dedicated to the memory of the Knight of Glin, who was represented at the launch by Olda and their daughters. Anyone in Chicago that day will recall how Irish art seemed to take over the entire city with blanket advertising on the city’s buses and the show’s banners running the length of Michigan Avenue. Perhaps not all of those partying on the streets that day – as the Chicago River flowed green – were drawn there to celebrate Thomas Roberts’s exquisite landscapes or Mrs Delany’s flower collages, but it seemed to us that they were; the Irish Georgian aesthetic had found its moment.

A week later a major conference on the Irish visual, landscape and decorative arts was convened at the Art Institute, in association with the Irish Georgian Society, with distinguished speakers including Stella Tillyard and Prof. Finola O’Kane and indeed with the actor Julian Sands talking about his passion for Irish silver. That evening in the gothic grandeur of Chicago’s University Club – in a happy collaborative event organised by Christopher’s great friend Michael Kerrigan – a volume of Irish Architectural and Decorative Studies was launched, published to coincide with the exhibition and featuring research derived from it. In all these festivities the ever courteous, slightly diffident – and permanently bow-tied – figure of Christopher Monkhouse was to the fore.

In total the exhibition attracted one hundred and seventy thousand visitors and its run had to be extended to meet the demand. Sadly, no serious interest was expressed by our national cultural institutions in bringing the show to Ireland.

As the genesis of the exhibition rather indicates, Christopher had a talent for friendship, and nurtured an international network of like-minded scholars, collectors, art dealers and historians in settings such as the notably convivial Club of Odd Volumes on Beacon Hill in Boston. He was actively involved with many conservation societies including Historic New England, Maine Historical Society, and the (American) Walpole Society and just a year or two ago was delighted to be elected a fellow of the Society of Antiquaries in London.

Extremely generous with his time, Christopher was always quick to help with any request from the Irish Georgian Society. During the course of the 2015 exhibition when he and Leslie were hard pressed by dozens of daily demands on their time, Christopher came to Dublin to give the key note address at an IGS conference held in Dublin Castle on art and the Irish country house. Straight off the overnight flight, he spoke eloquently and without notes for almost an hour to a hugely appreciative audience. In November 2019 he travelled to Ireland, for the last time, to speak on James Wyatt’s famous hall chairs, at a study day organised by the IGS at Castle Coole.

For all his travels, Maine remained home. Having long kept a summer home in the historic coastal town of Machiasport, he retired from the Art Institute to a beautiful former sea-captain’s house in Brunswick which was filled with the fruits of decades of his own collecting – Americana, architectural drawings and ephemera. It is sad indeed that the many retirement projects he had planned will not now be completed.

Obituaries elsewhere have, quite rightly, emphasised the many other cultural fields, often distinctly unfashionable, about which Christopher felt passionately – the architecture of Newport, Rhode Island, for example, or the poetry of Longfellow – but Ireland is fortunate indeed that, many years ago and really quite fortuitously, he came here to explore the overlooked typology of canal hotels and, thanks to the example of the two Desmonds, was inspired by our architectural heritage and visual culture to organise an exhibition that is unlikely to be repeated in its scope, scale or the breadth of its vision.

May he rest in peace.